The Senate version of legislation to add the Elson S. Floyd College of Medicine to the Family Medicine Residency Network passed out of the Senate Higher Education & Workforce Development Committee tonight.

The vote comes just in time, with all bills needing to be moved out of their policy committees by Friday. This evening’s meeting of the committee was its last before that deadline.

The House version also has cleared its policy committee and both bills await floor votes in their respective chambers. The measures would add WSU as a third co-chair to the Family Medical Education Advisory Board along with UW Medicine and the Pacific Northwest University of Health Sciences. Both have supported the bill.

The network was established in 1975 to support family medicine residencies in the state and encourage the development of new ones. State law was updated in 2015 and funding provided to incentivize hospitals and clinics to expand such programs and develop new ones. The advisory board also was established to make recommendations on the selection of areas where affiliated residency programs will exist.

Washington State University testified this morning before the State House Higher Education Committee in support of proposed legislationHouse Bill 2598sponsored by Representative Marcus Riccelli of Spokane, which would establish a matched student loan repayment program for doctors to increase the rural physician workforce.

The Elson S. Floyd College of Medicine has a holistic admissions process to identify students well positioned to practice in underserved areas of Washington upon completion of their training at the community-based medical school. Members of the diverse inaugural class of 60 students and the second class of 60 students currently in recruitment, for which almost 1,200 applications were received, could benefit from the proposed program.

You can view WSU Director of State Relations Chris Mulick’s testimony below:

Just shy of 100 WSU students gathered in Olympia today for their annual Coug Day at the Capitol event, with all six university campuses represented.

The day of advocacy is organized by the Associated Students of Washington State University and allows an opportunity for students to meet with state lawmakers and discuss higher education priorities.

The Legislature tonight passed the 2017-19 biennial capital budget with a vote of 95-1 in the House and a vote of 49-0 in the Senate. Budget writers reached an agreement last year but lawmakers had not yet voted to approve it without having yet reached agreement on high profile water policy legislation. The budget still requires the governor’s signature.

The capital budget provides funding for two priority construction projects in Pullman critical to the future of plant and animal agriculture in Washington. Lawmakers approved $52 million in funding to construct the Plant Sciences Building, which will replace half-century old facilities to facilitate modern plant research and develop new varieties that enhance competiveness and ward off disease. The Global Animal Health Phase II project received $23 million in construction funding and would be the new home of the Washington Animal Disease Diagnostic Laboratory, which accreditors have repeatedly warned needs a new facility to continue the crucial monitoring for animal diseases for the region.
The budget provides $3 million in design funding for the Academic Building in the Tri-Cities and $500,000 in predesign funding for the Life Sciences Building in Vancouver. Both projects will help support students pursuing STEM disciplines.

Notably, the proposal provides the $1.272 million necessary for the WSU Energy Program to administer a new renewable energy incentive program. Legislation directing the administration of the incentive program was approved late in the 2017 session but was not funded.

The governor’s proposal also includes $500,000 for WSU to hire a full-time director and support staff for the Joint Center for Deployment and Research in Earth Abundant Materials (JCDREAM). This appropriation would also support a competitive research grant program for the center, which is a collaboration with the University of Washington and the Pacific Northwest National Laboratory.

You can learn more about WSU’s budget requests here.

The unveiling of the governor’s budget proposal sets the budget writing process in motion. The 60-day supplemental legislative session convenes on January 8, at which time the House and Senate will begin crafting their supplemental proposals.

The supplemental budget proposal introduced in the State House of Representatives today provides $580,000 for WSU to establish an agriculture program in Western Washington.

The organic agriculture program would be centered at the Everett University Center but would leverage the university’s Extension resources as well. WSU requested $832,000 to bring the program to Everett alongside a degree in Agriculture and Food Security. With resources being tight, House budget writers chose to focus on the organic program.

The university expressed its appreciation in testimony below. The Senate budget could be unveiled as soon as this week before a compromise plan is negotiated and sent to the governor ahead of the scheduled March 10 adjournment.

The State Legislature adjourned Friday, closing out a legislative session for the history books at WSU after reaching final agreement on operating and capital budgets for the next two years.

Operating budget appropriations fully fund a historic phased in tuition reduction of 15 percent for in-state undergraduate students at WSU by fall 2016. The budget also provides funding to support the development of a new community based medical school at WSU’s health sciences campus in Spokane, and funds new software engineering and data analytics programs at the Everett University Center. You can read more about the operating budget here.

Receiving an uncommonly high number of bipartisan sponsors in both the House and the Senate for legislation to amend a nearly 100-year-old law that limited medical education to the University of Washington, the Legislature approved legislation authorizing WSU to establish, operate and maintain a separately accredited school of medicine. It was a truly historic event that the university and the state of Washington celebrated.

Other policy measures approved this session include legislation authorizing minors to taste but not consume alcohol for educational purposes, primarily in viticulture and enology programs. Also approved was legislation to establish a research collaborative that WSU will lead around rare earth materials, and legislation to study and implement best practices to address sexual assault and violence on college campuses.

By any measure, this was an extraordinary session – and year – for the university that celebrated its 125th birthday as well as the 25th anniversary of its branch campuses. After three special sessions, lawmakers passed budgets that demonstrate strong support for WSU and higher education, continuing what late President Dr. Elson Floyd proclaimed to be one of the best years in the history of the university.

Lawmakers and Gov. Inslee honored and recognized President Floyd’s leadership this session and throughout his lifetime, a legacy that the university will carry forward as it implements the outcomes of this banner year for WSU.

A two-year construction budget agreement reached by the Legislature funds WSU’s top capital priorities to build an Academic Building at the Everett University Center and to design the Plant Sciences Building on the Pullman campus.

The $54.6 million provided for the WSU Academic Building at the Everett University Center allows the university to begin construction of the facility and address the Center’s need to house current and projected degree programs by WSU and its partner institutions.

Full funding for WSU’s $6.6 million request to design the Plant Sciences Building on the Pullman campus will continue progress toward the research and education complex of interconnected facilities that support interdisciplinary collaboration among the institution’s leading scientists. The project also would provide modern lab space for university researchers in horticulture, plant pathology, plant biochemistry and crop and soil sciences.

The budget also provides $30.3 million to renovate historic Troy Hall in Pullman and $400,000 for predesign of a new Academic Building at WSU Tri-Cities.

Legislative leaders today introduced and then swiftly passed a compromise operating budget for the next two years that will cut tuition at Washington State University while funding academic expansion at Everett and the medical school the university hopes to establish in Spokane.

The final agreement, embodied in Senate Bill 6052, was approved by the Senate 38-10 and then the House 90-8. You can find the agreement here.

It fully funds a historic tuition reduction of 5 percent for resident undergraduates this fall and an additional 10 percent in the fall of 2016 by replacing lost tuition revenue with new state appropriation.

It also funds WSU’s request for $2.5 million to support the development of a new community based medical school at its health sciences campus in Spokane and provides $2.4 million to bring software engineering and data analytics programs to the Everett University Center.

An agreement on a two year capital budget is expected to be unveiled Tuesday. 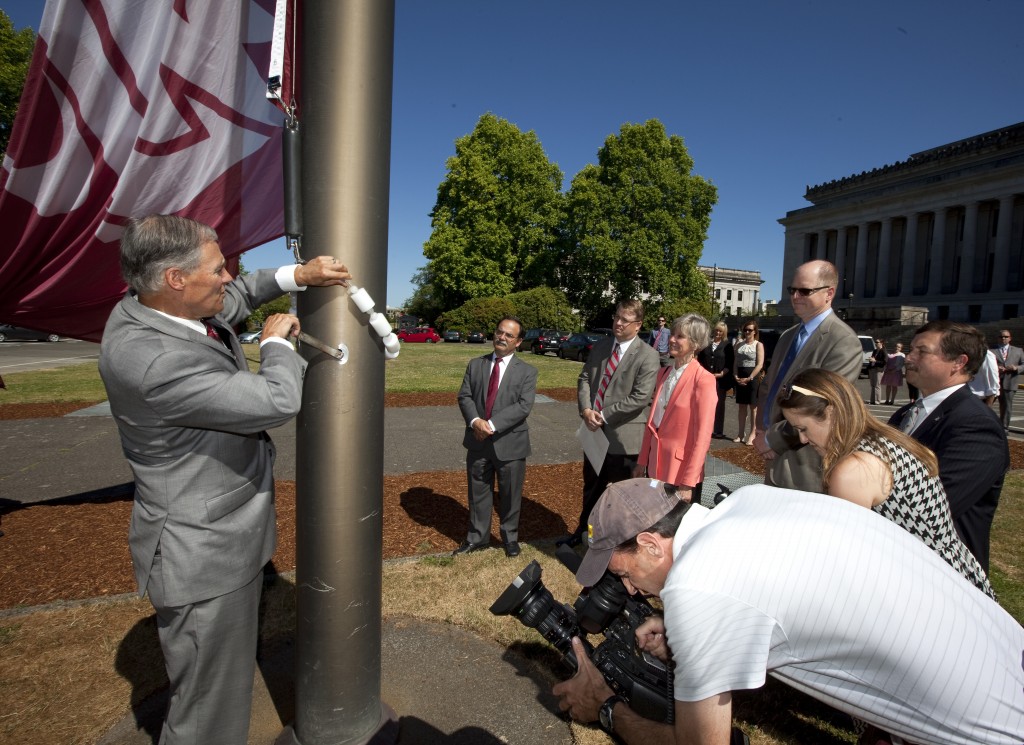 By order of Gov. Jay Inslee, the WSU flag was raised at the flag circle on the state Capitol grounds Thursday afternoon to honor university President Elson S. Floyd, who died Saturday at the age of 59. 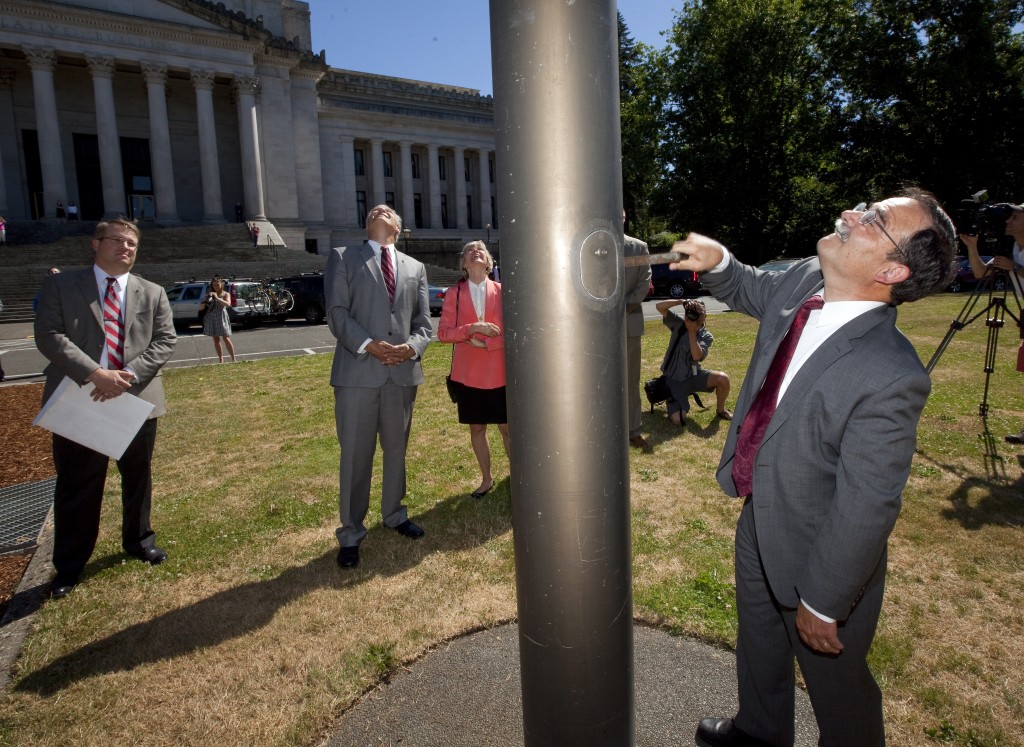 In addition, Gov. Inslee has ordered all flags across the state to be lowered to half-staff on Saturday in Floyd’s memory.

The tribute followed the passing of two resolutions earlier in the day during the House and Senate floor sessions. 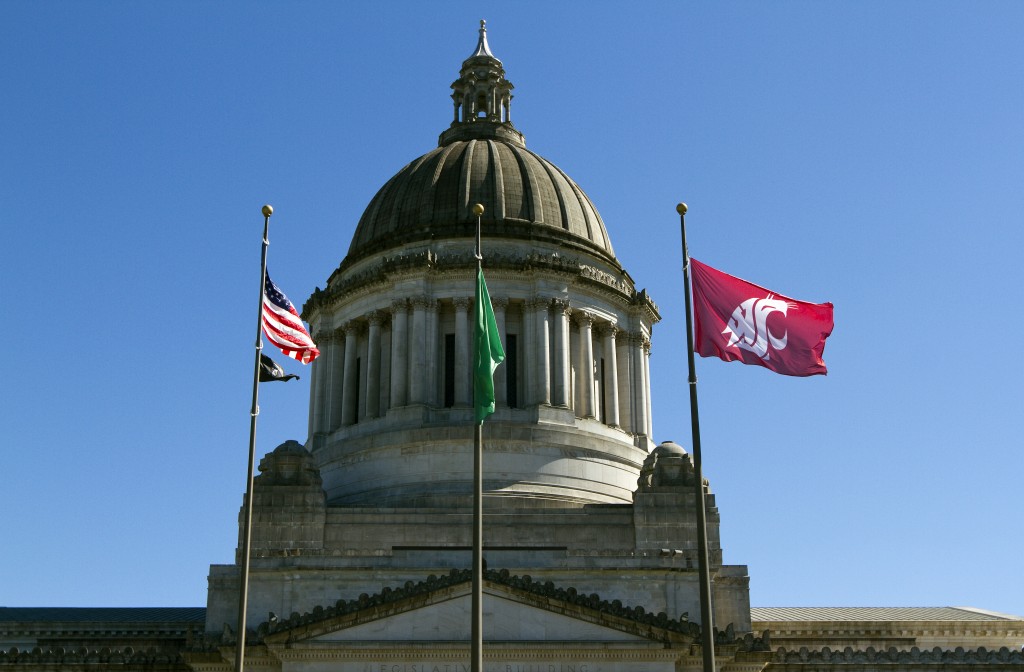 Both resolutions, HR 4645 and SR 8685, sought to honor the legacy and achievements President Floyd established during his time at WSU. Senators and Representatives hailed Dr. Floyd for his work as an advocate for higher education.

The family plans services for President Floyd at noon, Saturday, June 27, in Henderson, North Carolina. Because he was such a student-focused president, the official university celebration of life honoring him has been scheduled for Wednesday, Aug. 26, after the students return for fall semester. It will be held in Beasley Coliseum on the Pullman campus.

In lieu of flowers, the family suggests memorial gifts to honor President Floyd be made to the Elson S. Floyd Founders Fund for the WSU College of Medicine.