Legislation that would allow WSU to establish an independently accredited school of medicine was heard in the House Higher Education Committee this morning.

Presenting for WSU were President Elson Floyd and Ken Roberts, acting dean of the WSU College of Medical Science. You can watch the hearing below.

Washington State University President Elson Floyd presented the university’s vision for a community based school of medicine to the Senate Higher Education Committee this afternoon.

Bills to authorize WSU to pursue medicine as an academic discipline were introduced in the Legislature this week. Joining Dr. Floyd today was Ken Roberts, acting dean of WSU’s College of Medical Sciences. You can view the presentation below. 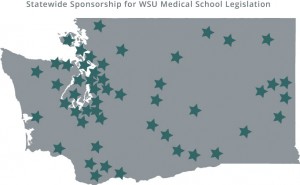 Rep. Marcus Riccelli and Sen. Michael Baumgartner introduced legislation today that authorizes the university to pursue the establishment of a medical school headquartered in Spokane.

President Floyd expressed his gratitude towards Sen. Baumgartner and Rep. Riccelli for their work in preparing House Bill 1559 and Senate Bill 5487. Both bills would change a 1917 statute that currently limits the delivery of medical education to the University of Washington.

You can check out the Spokesman-Review’s coverage here and an Associated Press report here.

It was a packed House Capital Budget Committee meeting yesterday as the group convened to hear testimony regarding Gov. Inslee’s 2015-17 Capital Budget Proposal.

WSU expressed appreciation for the funding of two key projects: the Everett Academic Building and a renovation of Troy Hall in Pullman. However, the budget didn’t fully fund either request as the Everett building was shorted nearly $6.5 million and Troy Hall was underfunded by $4.3 million.

WSU highlighted the omission of  design funding for the much needed Plant Sciences Building in Pullman.

Video of WSU’s testimony at the hearing can be found below.

WSU offered its support this week for a measure that would direct two-thirds of new revenue in future years to education, including early learning and higher education.

Senate Bill 5063 was heard in the Senate Ways & Means Committee earlier this week and you can view WSU’s testimony below. The bill would prioritize education funding except in cases involving new court rulings or extraordinary growth in demand for non-education services.

A measure that would align state laws affecting community college and university programs in enology, viticulture and wine business was among the first to be heard in committee this legislative session.

House Bill 1004 would authorize WSU to pursue a state license allowing underage students to taste but not consume wine as part of their instruction. Students at community colleges already have that opportunity.

Video of the entire committee hearing from earlier this week can be viewed below.

The 95,000 square foot project received $10 million in 2013 for design and land acquisition and will be ready for construction by July. It would house existing and new academic programs offered at the center, which WSU assumed management of last summer.

“I think the building we’re planning is really going to be a gem in the community,” said Paul Pitre, academic dean of WSU North Puget Sound.

Legislators are back on the hill today, having convened at noon to kick off the 105-day legislative session. Among the top priorities for this year’s session will be determining the two-year budget plan for the state.

Budget pressures have re-emerged due largely to legal requirements to increase state spending on K-12 education. Lawmakers in the House and Senate are expected to produce their versions of a solution in April before reconciling their differences.

For more information on WSU’s focus heading into the 2015 session, check out our Legislative Agenda.

The agenda, found here, was presented to WSU’s Board of Regents last week.

The university is requesting legislation authorizing the university to pursue medicine as an academic discipline and $2.5 million in the operating budget to support accreditation activities for a school of medicine.

It also is asking state legislators to continue the reinvestment in higher education that in 2013 paid for investments in faculty and staff and high demand academic programs that allowed tuition to be frozen for the past two academic years.

The university is also seeking $61.1 million in the capital budget to build a new Academic Building at the Everett University Center. WSU is requesting $4.5 million in the operating budget to add 10 new majors to the center in four academic disciplines.