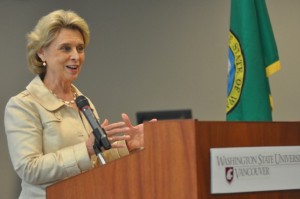 Governor Chris Gregoire told nearly 150 community leaders, students, faculty, staff and others at WSU Vancouver Thursday that the branch campus and university at large are keys to the state’s economic recovery.

On campus to tour the Engineering and Computer Science Building –scheduled to open in January 2012 – Gregoire hailed the university’s increasing commitment to producing engineering degrees, its collaboration with Clark College and noted that it could be tempting to take WSU Vancouver for granted.

“It hasn’t been here that long and now it’s part of the heart of the community,” Gregoire said.

In recapping the recently completed legislative session, Gregoire recounted deep cuts made to higher education and explained how students and families will be asked to help keep institutions whole through tuition rates that, while higher, will still lag behind schools in comparable states.

“This great institution cannot continue to absorb the cuts,” the governor said.

She said the community and its developing high tech economy is situated well to rebound from the recession “but without WSU Vancouver I don’t think it would be what it is today or what it can be tomorrow.”

Governor Chris Gregoire is slated to tour the new Engineering and Computer Science Building at WSU Vancouver Thursday afternoon before a reception with community and business leaders, students, faculty, staff and others.

The $38.5 million building is currently under construction and is scheduled to open in January 2012, providing 58,000 square feet of new classroom, office and laboratory space. It was originally sought to meet the engineering and high tech needs of Southwest Washington’s regional economy.

Welcome back from the Memorial Day Weekend!

On May 18th, First Gentleman Mike Gregoire signed a Memo of Understanding at WSU Tri-Cities designating it as a Veteran Supportive Campus.  Due in large part to the services available on campus to veterans, student veterans, and their families, veterans now make up 10 percent of the student body, a number that continues to steadily grow.  WSU’s commitment to helping all Washingtonians achieve higher education is reflected in this momentous occasion.

Please visit the WSU Tri-Cities Office of Veterans Affairs webpage for a slideshow and full article of the event.

The House and Senate both gave final approval to new two-year operating and capital budgets on the session’s final day. In short, the operating budget cuts $108 million, or 26 percent, from WSU’s state appropriation and provided authorization for consecutive tuition increases of 16 percent, which would reduce the net cut to about 5.2 percent.

It’s worth noting that WSU’s state appropriation for the next two years is $1 million smaller than the one the Legislature appropriated for the university 20 years ago.

Overall, the Legislature left $723 million in reserve. Of that, $442 million is unrestricted. The next state revenue forecast is June 16.

Dr. Gregory Belenky, director of the WSU Sleep and Performance Research Center, testified in front of the U.S. Senate Aviation, Operations, Safety and Security subcommittee yesterday on the importance of sleep and air traffic controllers’ effectiveness on the job. 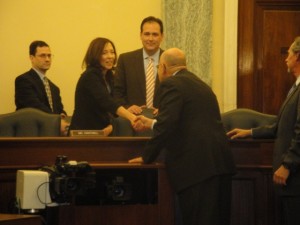 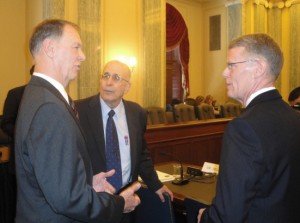 Dr. Belenky’s research in the sleep lab at WSU Spokane supports the idea of providing air traffic controllers with on the job napping built into their work schedule.  The sub-committee may consider new regulations on the FAA to control safety oversight as a result of the recent increase in air-traffic controller errors.

The compromise operating budget introduced by legislative leaders and approved by the House Tuesday would cut WSU’s state appropriation by $108 million, or about 26 percent.

That represents a slight improvement over proposals earlier put forth by the House and Senate. The net cut would be kept to $39 million, or 5.2 percent, with the implementation of 16 percent tuition increases authorized in the budget.

The spending proposal also incorporated most of the changes sought by WSU to help manage its cuts. The plan does not dictate how the university must achieve compensation savings, for example.

The proposal was approved 54-42 in the House Tuesday evening and now needs approval in the Senate before today’s scheduled adjournment of the Legislature’s 30-day special session.

Also needing approval is a capital budget. An agreement was reached Tuesday morning after all-night negotiations produced a path forward for a debt reduction plan. An actual budget proposal and project list is expected to be announced this morning.

The word is out that legislative leaders have reached agreement on an operating budget compromise to close a shortfall of more than $5 billion.

All the details are scheduled to be made public at 10 this morning. You can read about it here and here and watch the press conference at TVW.org. You’ll be able to find the budget documents themselves here.

There’s still no word of any agreement on a debt reduction measure that would allow for the passage of a capital budget and legislative leaders are talking openly about not having one.

After a busy weekend in the statehouse it appears as though the Legislature is progressing toward adjournment. This would come not a week too soon as its 30-day special session is due to expire on Wednesday.

You can read more about key developments here and here.

There is still a lot of work to be done before lawmakers can leave town. An operating budget agreement has yet to be announced and there is no resolution so far as to a debt reduction measure that would pave the way for the passage of a capital budget.

In addition, WSU is tracking a pension bill that, as approved by the Senate, would allow universities to continue to offer a defined contribution retirement plan to exempt staff. It needs a concurrence vote in the House.

And on a final note, the Senate on Sunday gave final approval to a bill that would replace the state’s Higher Education Coordinating Board with a new Council for Higher Education. Many functions of the HEC Board would still exist and be transferred to other entities after the board sunsets on July 1, 2012. The membership and responsibilities of the newly formed council would be determined by a steering committee.

The weekend papers featured a couple of opinion pieces worth noting that hailed last week’s signing of legislation that would create a pathway for WSU to assume management of the University Center of North Puget Sound in 2014.
This Seattle Times editorial hailed the development as a “triumph of persistence”.
And this column co-authored by Sens. Mary Margaret Haugen and Nick Harper appeared in the Everett Herald. In it, they assert the bill represents “a major victory for North Puget Sound residents.”

Governor Christine Gregoire this afternoon signed Senate Bill 5636, creating a pathway for WSU to gain management of the University Center in Everett in 2014.
The bill won’t actually take effect until the state’s Higher Education Coordinating Board considers whether the matter must first go through its systems design review process. With the HEC Board’s blessing, a coordinating and planning council would draft a strategic plan for appropriate baccalaureate expansion at the center to submit to the Legislature along with a budget. The Legislature must approve future expansions.
WSU also would be required to begin an engineering program at the center.
University President Elson Floyd and regents Laura Jennings and Connie Niva participated in the bill signing ceremony along with an array of key legislators and North Puget Sound community leaders and stakeholders. 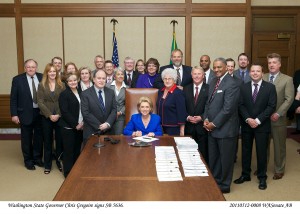