Chilton, a fifth-year student in clinical psychology is currently working towards her Ph.D. She completed her bachelor’s and master’s degrees at WSU and represented her Coug peers as the president of the WSU Graduate and Professional Student Association until 2022.  She was nominated by Governor Inslee to fill the student regent position, which is designated to provide a student perspective on the WSU Board of Regents.

In her testimony Chilton spoke about growing up in Tri-Cities as a first-generation college student, raised by a single mother who inculcated higher education as her pathway and resourcefulness as a tool for survival. Chilton shared her caregiving experience as she supported her mother during her illness while attending graduate school.

“This was possible because I go to WSU – a university where not only am I receiving excellent training as a future psychologist, but also where I’m seen as a whole human being, part of a large ecosystem with important ties to family and community,” Chilton said. “Because of this I’ve had the opportunity to achieve a level of education no one in my family has before while also getting to be with my mom in her final months.”

The committee recommended approval on a unanimous vote, sending the confirmation to the full Senate for consideration. You can view Regent Chilton’s confirmation hearing below.

We recognize many of you are monitoring the recent Notice of Proposed Rule Making out on the Duration of Stay for international students.

The deadline for comments was October 26th and we know that WSU sent comments in via International Programs. As background there are many letters circulating form Capitol Hill signed by the Washington Delegation and sent to the Administration on this proposed rule:

Rep. Jamie Herrera Beutler (R-WA) was joined by 19 other GOP members of the House in a sign-on letter to express concerns with the Department of Homeland Security’s recent notice of proposed rulemaking on “Establishing a Fixed Time Period of Admission and an Extension of Stay Procedure for Nonimmigrant Academic Students, Exchange Visitors, and Representatives of Foreign Information Media.” The letter says that the proposed rule would “be detrimental to the United States’ ability to attract the best and brightest international students and exchange visitors from around the world.”  The rule would modify the department’s longstanding duration of status policy to a fixed duration policy which would allow F, and J, and I visa holders two or four years to complete their degree, depending on several factors. Under the proposal, a student who needs additional time to complete their degree would need to petition DHS for an extension of stay.

The final letter was signed by twenty Republicans including Washington’s Republican members Congresswoman McMorris Rodgers and Congressman Dan Newhouse. The strategy behind this was to have the Administration hear from Members of their own party with concerns on these changes.  We led the efforts with the office but worked with APLU who coordinated the association work and with UW on this letter.

PAC12 also sent a letter expanding on how the proposed rule would impact international student athletes. They note the proposed rule is “deeply flawed and would undermine the ability of colleges and universities to recruit the best students from around the world”. They also expanded on the financial implications of the ruling for the students and highlighted how the uncertainty would detrimentally impact athlete’s choices before strongly opposing it.

Senator Murray also sent a letter late in October with 28 other Senators with extensive comments on this proposed rule dissecting the language of the mandate and noting five major areas of concern with the proposed rule;

4 – Unnecessary given the current reporting systems

5 – It would further strain United States Citizenship and Immigration resources.

Gov. Jay Inslee this afternoon signed into law a bill requiring higher education institutions that use dogs and cats for research offer the animals up for adoption before considering euthanasia.

Senate Bill 5212 was passed out of both the Senate and the House unanimously, with stakeholder support from the University of Washington, Washington State University, and the Fred Hutchinson Cancer Research Center. WSU has used cats and dogs in research projects related to pharmacology, nutrition, orthopedics, arthritis and cancer therapy, helping to improve overall animal health and comfort.

The legislation was sponsored by Senator Guy Palumbo, D-Maltby, who serves as Chair on the Senate Higher Education & Workforce Development Committee and operates his own dog boarding business in South Snohomish County.

Members of the Senate Higher Education & Workforce Development Committee held a work session on meeting workforce demands in Washington State’s Health Care Industry this week and called WSU forward to present its case for how the Elson S. Floyd College of Medicine is addressing this major issue. Since the medical school’s authorization in 2015, the university’s mission has been to provide more physicians in core disciplines to rural and underserved areas of Washington. According to Ken Roberts, Vice Dean of Academic and Community Partnerships at the Elson S. Floyd College of Medicine, the university is seeking to address this demand by focusing on the admissions process and curriculum structure to influence the outcomes of their mission goals.

By creating a targeted approach to their admissions process the Elson S. Floyd College of Medicine has seen the formulation of a student body that positively represents the communities which the university seeks to serve. The combined first two classes of the medical school have included a student demographic which are:

“You don’t have out-of-state tuition at the medical school,” noted Senator Jeff Holy, “There’s a reason for that.” This is because the University is pulling its medical student pool directly from local communities around Washington State. As Dr. Roberts points out “if you want physicians to go back and practice in areas where it’s needed most, you need students coming into your medical school that represent residents from those places.”

The second focus on curriculum is driven by the selection of core disciplines the university will train students in and also where they will be trained in. The university will anchor student education at its four medical school campuses in Everett, Vancouver, Spokane and the Tri-Cities, before getting students “out into more rural spaces so they have a chance to bond and connect with the communities and medical practices there — and most importantly with the patient population that they are seeing in those places.” Currently the University as 79 clinical affiliation agreements with medical practices across the state – from Forks to Goldendale and from Grand Coulee to Longview. 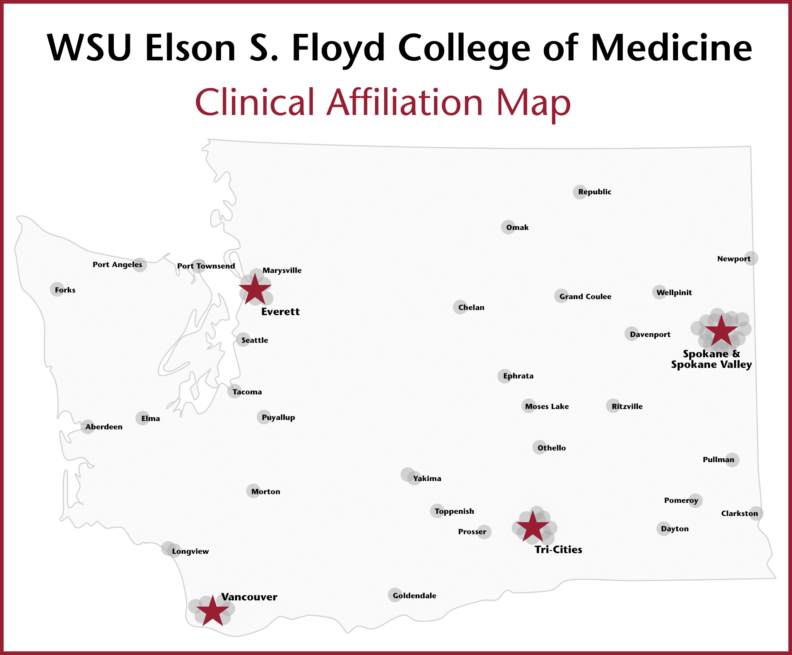 Additionally, the University continues to raise funds to offset student costs. “I’m happy to report that we’ve raised over $21 million for the medical school that’s helping reduce the cost of education for our students,” says Chris Mulick, Director of State Relations at Washington State University. “Every student so far as has been offered a scholarship, and we have had students who can afford tuition reject the scholarship asking us to repurpose it towards other students who have greater needs. These are the type of students we’re recruiting.”

Check out the video below to watch the full presentation, including more information on WSU’s admission selection process and its curriculum plan.

The Science Coalition Round up for February 5th 2019 provided useful information which may be of interest:

The new chair of WSU’s Committee for Cannabis Research and Outreach appeared before the House Commerce & Gaming Committee today to outline the university’s efforts to study the effects of cannabis consumption.
Initiative 502 carved out funds for the University of Washington and WSU to do such work. Michael McDonell, an associate professor in the Elson S. Floyd College of Medicine, was recently named to lead research efforts at WSU. You can watch his presentation below.

The Joint Legislative Audit & Review Committee (JLARC) met today to receive a presentation from the state Auditor’s Office on its performance audit report determining the costs per student for medical education at the WSU Elson S. Floyd College of Medicine (ESFCOM) and the University of Washington School of Medicine.

The report by the Auditor’s Office highlights the complexity of identifying costs specific to medical education and complications with comparing actual costs to projected costs between two fundamentally very different medical schools at notably opposite stages of development.  WSU’s Chris Mulick, director of state relations; Jim Zimmerman, vice dean for administration, accreditation and finance for ESFCOM; and Ken Roberts, vice dean for academic and community partnerships for ESFCOM provided a public agency response to the report, which you can view below. WSU thanked the Auditor’s Office for considering projected WSU costs at a date in the future by which time the college will have developed economies of scale not possible until enrollment scales up.

The inaugural class of 60 medical students in the WSU Elson S. Floyd College of Medicine is now in its fourth week of instruction and students have already visited their assigned clinical sites across the state. Learn more about the diversity of the inaugural class here.

Budget proposals previously released by the Governor, Senate and House did just the same. The final budget agreement, coming just hours before the onset of the new biennium, now must be approved by both chambers and signed by the governor before going into effect.

Here are the highlights of the operating budget as it pertains to WSU.

A new forecast of future tax collections has added $79 million in anticipated state revenues for the current two-year budget cycle and another $80 million for the one that begins July 1. That’s a small bump for a state budget that is expected to near $42 billion.

You can read the forecast here and find the press release from the Office of Financial Management here.

That provides a critical piece of information as legislative negotiators work to craft a compromise operating budget to send to the governor. Budgets proposed by the governor, House and Senate all provide $10 million to fund 60 first and second year medical students for the Elson S. Floyd College of Medicine, the university’s top legislative priority. The budgets differ on other operating budget priorities relating to STEM degree production, compensation and the State Need Grant.

The Legislature also still needs to write a capital budget. While funding for the design of a new academic building at WSU Tri-Cities and for the predesign of a Life Sciences Building at WSU Vancouver is included in all three budget proposals, they differ on WSU’s top capital budget priorities for funding the construction of the Plant Sciences Building and the start of the Global Animal Health phase II project, both in Pullman. 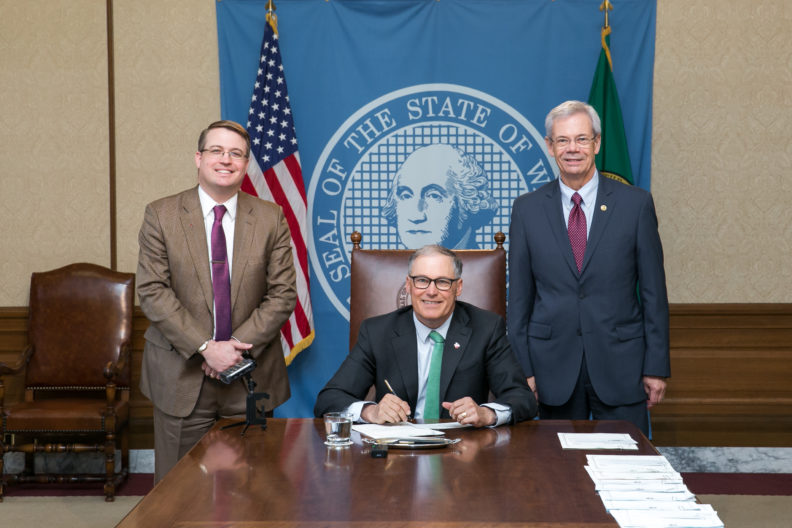 The term “branch” has been officially removed as a descriptor for WSU campuses historically known as branch campuses.

Gov. Jay Inslee signed HB 1107 into law during a bill signing ceremony this afternoon. The bill removes the term “branch” from applicable state laws. It does not change governance or make any other changes.

WSU has supported this bill throughout this year’s legislative session, testifying in support before the Senate on March 16th and before the House back in January.