A bill seeking to codify the Soil Health Initiative, a WSU partnership with the Washington State Department of Agriculture and Washington State Conservation Commission, cleared another hurdle today being voted off the Senate floor unanimously.

Senate Bill 6306 establishes scope for the Initiative. “The goals and objectives of the initative are to improve the viability of our agricultural sector, improve nutrition, and improve environmental function” said the bill sponsor, Senator Marko Liias, in his floor speech. “We are applying the best science and the best practices and working with our great folks at Washington State University to come up with innovations and working with the Conversation Coalition and others to share those innovations.”

The legislation also establishes reporting requirements for WSU, WSDA, and the Commission to provide progress reports every other year on the state of the soil to the Legislature and the Governor beginning October 1, 2020.

Senator Judy Warnick also spoke in support of the bill, “For us to be able to work with the land grant university, WSU, and others to identify best practices I think is a good thing – especially for our agriculture producers.”

The bill now moves to the opposite chamber in the House. You can view the full floor debate on the bill below.

In their meetings with legislators, the six groups of regents and trustees discussed three legislative priorities:

Following the creation of the Workforce Education Investment Account in 2019, the group’s first priority is protecting the investments made through the account, including funding for the Elson S. Floyd College of Medicine, the Washington College Grant and training programs in a wide array of high demand fields – producing nurses, teachers, welders, physicians, computer scientists, and more.

These new investments segue into their second legislative priority of improving educational attainment. In a time when Washington employers are anticipating 740,000 job openings by 2021, 74 percent of which will require an associate degree or higher, credential attainment is essential as only 40 percent of Washington high school students currently earn a credential beyond a high school diploma by age 26.

Their final priority is focused on increasing FASFA completion. Only 54 percent of Washington high school seniors completed the FASFA in 2017, leaving over $50 million in federal financial aid on the table. 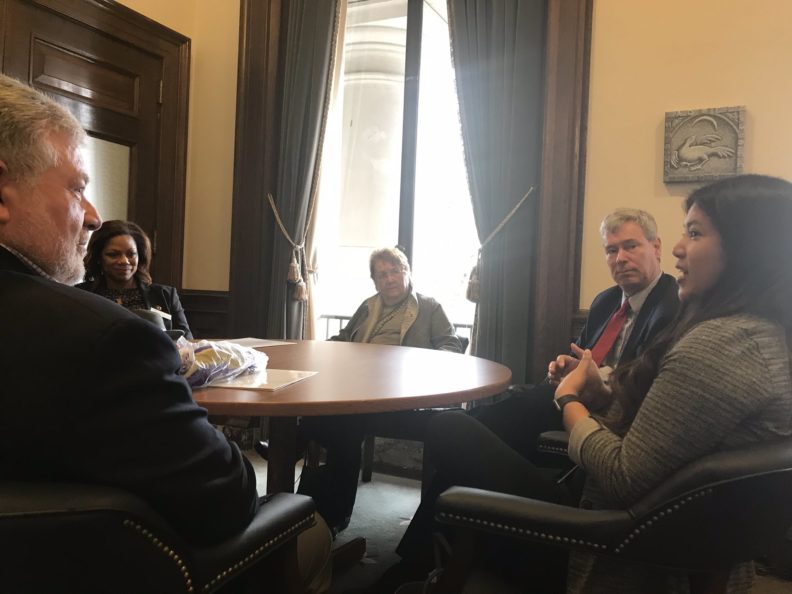 Participating for WSU were Brett Blankenship, chair of the WSU Board of Regents, and student Regent Johanna Pantig, pictured above.

Some 63 Washington State University students turned out in the statehouse Monday for the annual Coug Day at the Capitol advocacy event.

The student body from every WSU campus, including the WSU Global Campus, was represented. After a morning briefing, students fanned out across the Capitol campus for a total of 84 meetings with policy makers to press their legislative priorities.

Organized annually by the Associated Students of Washington State University, the annual event is a hallmark component of students’ advocacy efforts. Students from each campus have been planning for months. 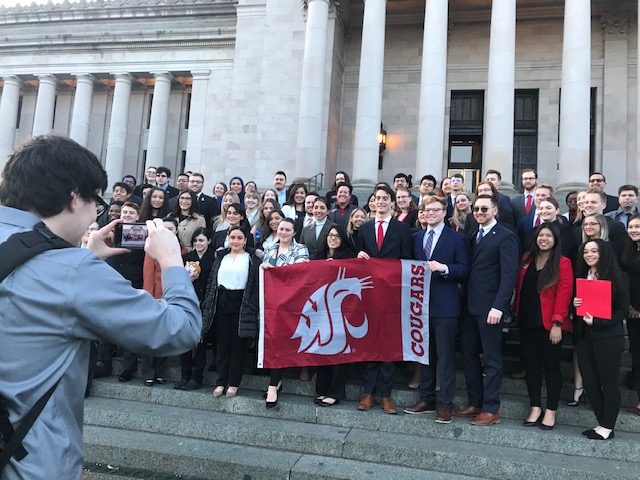 In attendance were students from the Elson S. Floyd College of Medicine for the first time in the history of the annual event. 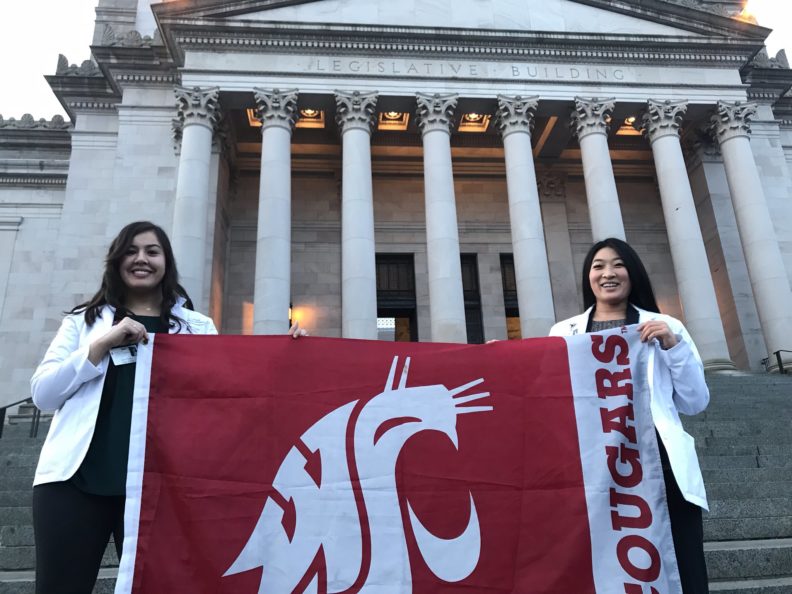 Legislators were returning to Olympia Monday to begin the third week of this year’s 60-day legislative session with the already frantic pace quickening with the first of a series of legislative deadlines for bills looming at the end of next week.

Check out more details from the day’s events with the hashtag #CougDay2020.

JCATI was established by the Legislature in 2012 with a $3 million biennial appropriation to fund seed grants for research in the aerospace industry at state institutions of higher education. About $1.2 million of those funds, on average, have funded research projects at WSU each biennium.

The bill now waits to be voted on in committee.

WSU signaled its support Thursday for a measure to fund the Soil Health Initiative, a multi-agency research and extension initiative. Senate Bill 6306 formally establishes the initiative and outlines assignments for WSU, the state Department of Agriculture and the state Conservation Commission.

“Though farmers across the state are working hard to protect their soil, decades of traditional farming and soil management strategies have depleted the natural fertility and health of the soils” Chad Kruger, Director of WSU’s Center for Sustainable Agriculture and Natural Resources, told the Senate Agriculture, Water, Natural Resources & Parks committee.

“WSU is where the rubber really hits the road for farmers,” said Evan Sheffels, a policy advisor for the Department of Agriculture. “We trust WSU science and we very much appreciate when it’s there for us.”

The goal of the initiative, as outlined in the bill, is to improve agricultural viability, nutrition and environmental function. The legislation also requires WSU, WSDA, and the Commission to provide progress reports every other year on the state of the soil to the Legislature and the Governor beginning October 1, 2020.

You can watch Kruger’s full testimony below.

WSU testified in support of Gov. Jay Inslee’s capital budget proposal in both the House Capital Budget Committee and the Senate Ways and Means Committee Tuesday.

The Legislature convened its 60-day session Monday and the House and Senate will each produce their own capital budget proposals before crafting a compromise to send to the governor’s desk in March.

You can view this morning’s testimony in the House Capital Budget Committee below.

Gov. Jay Inslee gave a shout out to WSU and the Cosmic Crisp apple in his State of the State address this afternoon.

Cosmic Crisps dotted the tops of legislative desks on the House floor as the governor mentioned the development of the apple amidst a list of inspirational accomplishments over the past year.

You can watch the clip below.

The university is requesting $4 million in the supplemental capital budget for the Life Sciences Building in Vancouver. The project was previously funded for pre-design. This year’s request would design the facility, teeing it up for construction in the 2021-23 biennium. The $4 million was funded in Gov. Jay Inslee’s capital budget proposal introduced last month.

The building is needed to provide additional space for teaching and research space. Virtually all WSU Vancouver students would use the facility, either for elective courses in disciplines such as chemistry, biology and physics or coursework in their major. It would further provide enhanced space for existing teaching and research programs in neuroscience, nursing and molecular biology.

WSU is also requesting $788,000 in the supplemental operating budget to continue the development and distribution of next generation soil health strategies in collaboration with the Washington State Department of Agriculture and the Washington Conservation Coalition.

Finally, in collaboration with partners at the University of Washington, Western Washington University and others, WSU is pursuing the reauthorization of the Joint Center for Aerospace Technology Innovation (JCATI). The Center funds seed grants for research projects brought by industry. JCATI is fully funded but its authorization is scheduled to sunset in June. Senate Bill 6139 would reauthorize it for another 10 years through 2030.

You can read more about our legislative agenda here.

The governor’s supplemental operating budget included $27.8 million to support increased caseloads for the Washington College Grant. It did not fund WSU’s $788,000 request to support the soil health research initiative. As a supplemental budget, it largely did not fund new policy initiatives in higher education.

The Legislature convenes for its 60-day session on Jan. 13.

The state’s legislative auditor is recommending the reauthorization of a state funded research collaborative designed to serve the aerospace industry.

The Joint Center for Aerospace Technology Innovation was established by the Legislature in 2012 and given a $3 million biennial appropriation to fund seed grants for research at state universities. Since then, $9 million in total state funds have leveraged $7 million from industry partners participating in funded research projects and more than $22 million in additional extramural funds to support research. Some 109 projects with 64 aerospace companies have pursued advancements in areas such as aviation biofuels, power systems, composites manufacturing, space systems and more.

Aerospace companies in 13 Washington counties have participated, with at least one on each project, involving a total of 392 students.

Supportive of the legislation at the outset, WSU has been a heavy participant in funded research. Mary Rezac, Dean of the Voiland College of Engineering and Architecture, is also a member of the JCATI Board of Directors.

The center is scheduled to sunset on June 30, 2020. Before the Legislature considers reauthorization, the Joint Legislative Audit and Review Committee is required to conduct a sunset review. A draft of the report was shared with the committee Wednesday in advance of a final report in December. Committee staff is recommending reauthorization.

The draft report indicates the center is meeting legislative intent by funding research, enhancing student education and working with Washington aerospace companies. It further states the center is unique, efficient and economical.

“In my seven years on JLARC, you don’t see too many reports that we checked every single box,” said Sen. Mark Mullet, an Issaquah Democrat who chairs the committee.

He reminded the committee that part of its charge is to make sure effective programs don’t get terminated and that its members are uniquely qualified to speak to JCATI.

“If we don’t speak up for that program it will get terminated. We have to carry that forward. I hope everyone keeps that in the back of their head as we approach the January session.”

You can watch Wednesday’s hearing here: